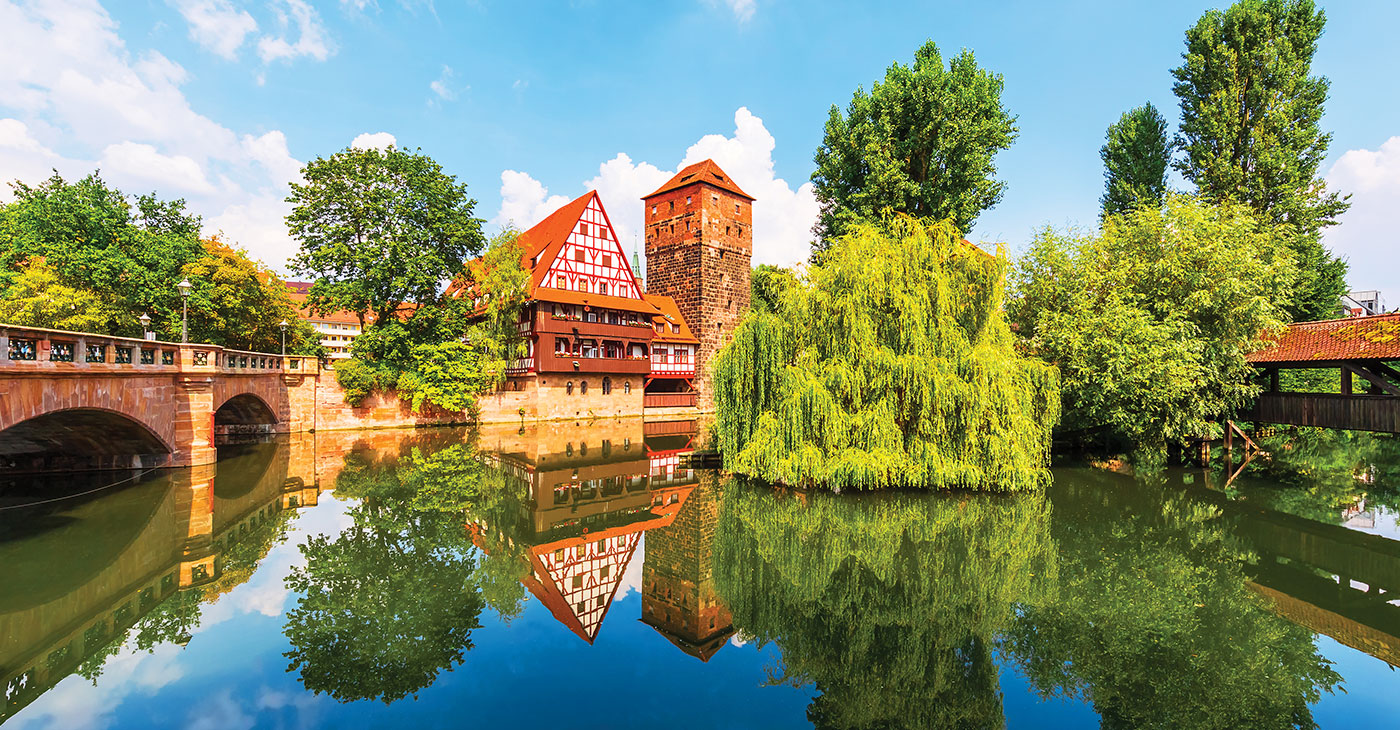 Our 2022 European river cruises are ready to begin departures in April – and we can’t help but join the celebration for the 30th anniversary of the launch of operations for the Rhine-Main-Danube Canal. Charlemagne ordered a canal to be built in 793, linking the Main and Danube rivers, but that was before locks were invented – so the Fossa Carolina became a ditch too far. Napoleon’s canal dream was cut short by Waterloo. King Ludwig I of Bavaria succeeded in 1840, but the Ludwig Bavarian Canal with its troublesome 101 locks couldn’t compete with the ease and efficiency of the Ludwig Bavarian Railroad.

Nevertheless, the dreamers persisted, and in 1992 the Rhine-Main-Danube Canal, became a concrete reality, a marvel of modern engineering, and the essential link in a 2,200-mile water highway spanning Europe from Amsterdam to Istanbul. As a mover of cargo, the canal still can’t compete with railroads, but it opened the door to a new industry that Charlemagne never imagined: the public touring by river cruise. To every corner of the continent that lost empires could not go, now travel dreamers can.

This remarkably new chapter within thousands of years of European history connects the rivers Main and Danube across the European Watershed, running from Bamberg through Nürnberg to Kelheim, outside Regensburg. Infinite stories reign in this region, including:

The Bamberg Rider: For ages, a life-size sculpture of a regal man astride a horse in Bamberg Cathedral has defied historians’ attempts to identify it. The medieval figure wears a crown but no sword or armor. Beneath one of his horse’s hoofs is the face of the Green Man, a pagan symbol of nature and rebirth that often appears in medieval Christian art. Some say the statue is St. George, since it is attached to the north pillar of St. George’s choir, but there is no spear or dragon, which typically identify him. Some think it is St. Stephen, who according to legend rode into a church in Bamberg to be baptized, but that legend did not appear until centuries later, so it could have been inspired by the statue instead of the other way around. Scholarly guesses have included Constantine (who stamped out paganism), Emperor Frederick II (the crusader who won Jerusalem without bloodshed), even the Messiah himself who appears in Revelations on horseback; but the stone horseman has no beard, as Jesus is always pictured, and is not armed for battle. Some speculate that the statue was moved there from somewhere else, and taken out of context, but most historians agree it is in its original place. Religious icons were meant to be commonly recognizable and echo well-known stories in the mind of the medieval beholder but in Bamberg that story is lost, and now the Rider is medieval abstract art, a mystery you can contemplate and interpret to your heart’s content. But beware. Mysteries are truly mysteries with no answer…

And of course, a little about wonderful Franconian wine: Franconia was once the largest wine-producing region in Germany but lost its dominance in the 17th century through a series of unfortunate events that included the Thirty Years’ War and a cooling period known as the Little Ice Age. The ravages of war were bad enough but climate change dealt what seemed like a fatal blow to the once prosperous vineyards along the Main River. What saved the winemakers from extinction by frost and mildew was the cultivation of Sylvaner grapes, which could survive the harsh fluctuations of temperatures, and thrive in the limestone-rich soil. Franconian winemaking rebounded, yet its production is only a tiny fraction of what it was in its heyday. But there’s another reason why Franconian wine often makes the lists of the Best Wines You’ve Never Heard Of. Ninety percent of the wine produced is consumed locally. In fact, during the 18th century it was against the law to export it for fear that the local supply would run out. (And if you’ve seen the size of the wine cellar at the Residenz in Würzburg, you know that an adequate wine supply was a major concern of the ruling princes.) Unlike the fruity Rieslings of the Rhinegau, the white wine produced here is dry and earthy. And earthiness is also reflected in Franconian wine’s signature container which harkens back to the Middle Ages: a flat, ellipsoid bottle called a bocksbeutel, a flattened shape with a practical purpose of keeping the bottle from rolling away.

Nürnberg, the Gingerbread City: The key ingredients in making gingerbread are ginger and honey, and in the Middle Ages the city of Nürnberg had both in abundance. Nürnberg was located along a spice route to the East, which brought a steady supply of ginger; it was also surrounded by dense forests of firs, pines, and lindens, the source of enough nectar to maintain a sizeable beekeeping industry and a market in honey. But most significantly Nürnberg had learning, based in local monasteries where knowledge of spices could be applied to pharmacological purposes or baked goods. By 1395, Franconian monks had introduced a version of gingerbread they called Lebkuchen, a name of uncertain origin which may be derived from the German word leben (“life”) or the Latin word libum (“consecrated cake”). These unleavened cakes were baked in molds known as “cookie boards” in the shapes of people or animals for holy days or special occasions. By 1643, there were master gingerbread bakers in Nürnberg organized into a guild to maintain quality and consistency (and trade secrets), which elevated gingerbread making to the level of an art form. That art form included architecture with the introduction of the gingerbread house (Lebkuchenhauser) in the 19th century, which some believe was inspired by the witch’s house in the Grimm Brothers’ tale of Hansel and Gretel. It may also be that gingerbread houses already existed before the Grimms discovered them. But wherever one follows the trail of crumbs that is Lebkuchen history, Nürnberg remains the “Gingerbread Capital of the World.”

Kelheim – at the confluence of the Atmühl and Danube rivers, is about a half hour from Regensburg; and so, the Regensburg Rhapsody: Regensburg had good reason to become one of the first German cities to banish through-traffic and create pedestrian-only promenades. This cultural gem is among the best-preserved medieval cities in Europe, incredibly surviving wartime damages virtually untouched. So proud of their heritage and history are the community minded locals that they were also among the first in the country to rehabilitate their old buildings to reflect their original architectural styles. Some 1,400 meticulously restored medieval buildings line the narrow lanes and lively squares and stand as testimony to the unrivaled wealth this town enjoyed in the Middle Ages. And thanks to contemporary residents such as Oskar Schindler, Pope Benedict, and the princely Thurn und Taxis family, who enriched Regensburg with their presence and fame, a visit to Regensburg is richer still. As you view in person sites that have remained impervious to time, imagine the stories that have spawned from them over the centuries… like Stone Bridge, spanning two arms of the Danube in a 1,014 foot long structure and reputedly built with the help of the Devil in the 12th century because nothing like it was accomplished before; legend has it that his fee was to claim the first soul to venture across… which is why the wily townsfolk sent across a dog, a cat and a chicken before they dared to walk to the other side on the bridge…