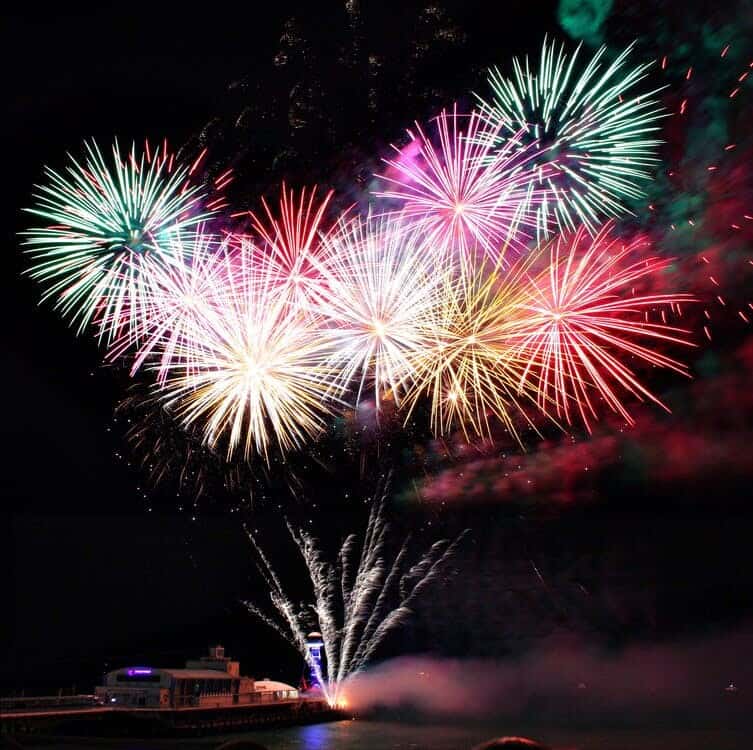 The Feast of Sant Joan is a big deal in Barcelona, also known to Catalans as the “Nit del Foc” meaning the “Night of Fire”. The celebration takes place on the Summer Solstice, the shortest night of the year. This public holiday is renowned for its electric atmosphere and the crazy parties which take place.

This is a date you will not be able to miss if you’re in the city, you’ll see fires in the street and hear constant fireworks throughout the city.

The celebrations begin on the 23rd of June and end on the 24th of June and take place across the country in many forms. The 23rd is known as the feast day and the day which many celebrate and the 24th is the non-working day. In Barcelona, everyone celebrates in their own way, bringing friends and families together for meals, parties, bonfires and fireworks.

Make sure to book your accommodation early!! Here’s our Barcelona accommodation guide for the best places to stay in Barcelona. We also recommend booking skip-the-line tickets online for all of the top Barcelona activities. For example, the Barcelona Pass includes a fast-track ticket to Sagrada Familia along with access to many other top landmarks in the city.

History behind the feast of Sant Joan / nit del foc

Sant Joan is one of the most important feast days for Catalans. The festivities take place firstly to celebrate the summer solstice, but also to celebrate the birth of St. John the Baptist. On the night of this celebration the sun reaches its highest point, before beginning to drop. The sun is seen as a symbol of fertility and wealth, and therefore must be given strength. This strength is passed on through the bonfires and fireworks, hence why they are so popular on this day. Another reason behind the use of flames on this day is to frighten off and dispel evil spirits. These festivities have been around since the 18th century and still continue today.

Traditions of the Sant Joan Celebration

The night is known to be very loud, beginning at dusk till dawn, with fireworks taking place all night long. In various districts throughout Barcelona you can experience parties in the streets as well as a large culinary offering. You will find plenty of music, with DJ’s and musicians taking over, and you can also find interesting traditions at places like Barceloneta such as the fire-spitting Correfoc.

The majority of parties take place in the Old Town District (Gothic Quarter). Here you can find the Canigó flame which reaches Plaça de Sant Jaume on the afternoon of the 23rd and is received by the municipal authorities. As well as the old town you will find people partying all night at the beach in Barceloneta, and you will be able to dance your way through every beach bar there!

By the beach you will also find that local restaurants put out extra chairs, tables and decorations, so that people can begin their celebrations off with a large dinner. They also often build special bars at the front to sell drinks and snacks for the party people as they arrive.

See also: The Best Beaches in Barcelona (Including the Nude & Gay Beaches)

There are said to be three symbols of Sant Joan; fire, water and herbs. The fire symbolises purity and is the reason that fires are lit. The water represents healing, as on the night of the 23rd some people bathe in the sea. The herbs symbolise remedy, with some claiming that on the night of Sant Joan their healing qualities are enhanced.

On Sant Joan day, the city is much quieter than the celebration the night before. Many bars will be closed, as well as shops and many supermarkets, you will also rarely see taxis or even people in the streets. The day of Sant Joan is known to be a day of rest.

An official food of Sant Joan is the ‘Coca’ or ‘Coques’ in plural, which is a bread style cake you will see in bakery windows throughout the city. You can buy both sweet and savoury Coques and those which contain crackling, fruit, nuts or cream. They have a distinct aniseed flavour however which is shared among all Coques.

There are not any other traditional foods for Sant Joan, however traditionally many Catalans will eat out for dinner on the evening of the start of the celebrations day. It is smart to book a table in advance to ensure you are not disappointed as it can get very busy during this celebration.

The Feast of Sant Joan is one of the most exciting celebrations of the year and one that is not to be missed. If you’re in Barcelona, aim to make the most of this holiday by celebrating like a local.

Check out the below posts for more things to do in Barcelona during the summer months: